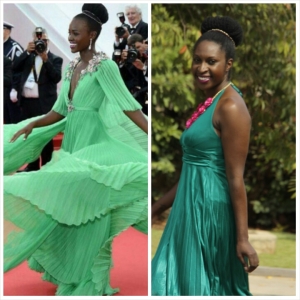 I undid my twists this morning, looked in the mirror and was really overwhelmed by how much hair there was. It looked so thick and I wondered how I ever manage to style it.

Anyway, I’m on week 20 of my protective style challenge. 20 weeks of different hairstyles! I thought that I would really struggle to get this far but I’m still having fun and there are still lots of styles left to try. Next week I’m back in a long term protective style to shield my hair from the dry weather so I thought I’d go all out this week and really get into the styling, outfit and all.

A couple of weeks ago Kenyan actress Lupita Nyong’o styled her hair like this for the red carpet at the Cannes Film Festival and as usual caused a huge buzz. She called it the donut and it’s also known as a ballerina bun. Here is my take on it:

Tie the hair into a high puff. I used a band made from a pair of old tights. I tend to slide the band up at the back until just where the head curves and then tie it at the front.

Gather the hair in the puff together and plait the ends into a tiny braid. It’s ok if you don’t get all the hair in. You don’t want the bun to be too tight. Just smooth any loose hairs in to place.

Tuck the braid in to the bun so that it isn’t visible. 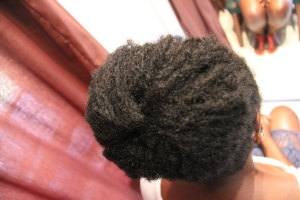 I added a scarf to make it a little more interesting.

To get the look Lupita rocked on the red carpet I used a gold necklace and placed it around the band at the base of the bun.

My dress isn’t as floaty as Lupita’s but I had fun trying.