One of the first things I did when I started this blog, was to look for pictures of women with natural hair. the first thing that came to mind was an afro and a certain black and white image consistently came up on various websites. 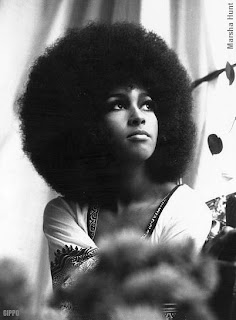 After doing some research, I found out her name and then read up on her. Marsha Hunt began life as a model and rock chick. She appeared on an iconic Rolling Stone magazine cover.

In 2005, Marsha shared her experience as a cancer survivor after having a mastectomy and losing her iconic hair. She is truly inspiration in many ways and embodies the ‘I am NOT my hair’ concept. Read that article here.

In an 2008 article, Marsha sheds more on her life since surviving cancer and having a daughter with rock star, Mick Jagger. Read it here.