The Kasisi Project is probably the most exciting event I have planned since the ZedHair Natural Hair Show in April 2013. And judging from the reaction of basically everyone, Kasisi seems to have captured the imagination and interest of a lot of people. I started this blog to document my natural hair journey and share what I learned along the way with others, while contextualising it for our African context. Over the years, I have had many wonderful conversations with naturals about their hair. One of the recurring themes when people share their natural hair story is that they wished they had learned how to take care of their hair when they were younger. Obviously you cannot turn back time, but this whole Kasisi initiative is about changing the narrative for at least some young women. 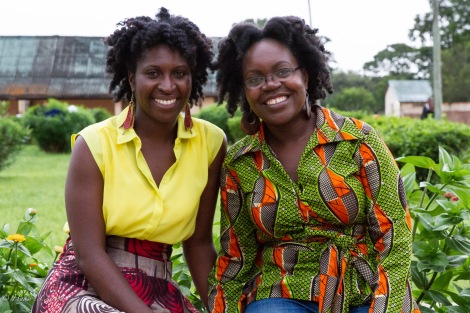 Masuka & Mwanabibi after a long exhausting day that was ultimately rewarding and satisfying.
Oh and the humidity and rain caused our hair to frizz and poof up, not that we noticed. Lol

Once Mwanabibi and joined forces to begin holding the natural hair workshops in July 2013, we wanted to have a high school workshop. The plan was to do it in December 2013 and have it last the whole day. We would approach sponsors to buy all the products for every girl in attendance. We would make it a girl’s empowerment seminar as well as natural hair education event. however, life happened and I was working in a rural area and Mwanabibi was travelling, so we were unable to organise the event as it would have taken months to arrange. We ended up having the natural hair dinner party instead as it didn’t require much effort to organise. 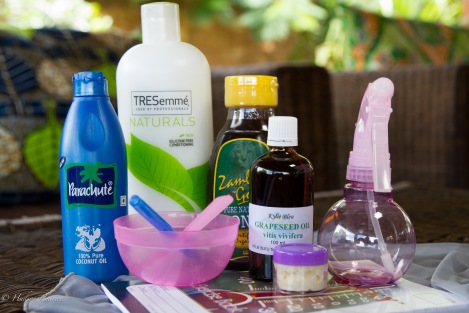 But the desire to impact the next generation didn’t go away. Instead of having a workshop in the next school holiday, we came up with something better. Why not mentor a group of girls and follow them along their natural hair journey? A boarding school was ideal because it is a controlled environment. A government or Catholic school where only natural hair is allowed would ensure tat we had a captive audience. We wanted to speak with Grade 8 students because that was their first year in boarding school. The idea was to impart knowledge and skills while they were still young so that they would have grow to love their hair over the years and be comfortable caring for and styling it. This way, we would reduce on the number of those girls who rush to relax their hair the day they write their final Grade 12 exam. For the same reason we also wanted to speak to Grade 12 students so that they would have one year to learn healthier ways to manage their hair and so relaxing their hair would not be because they didn’t know how to take care of their natural hair or because they didn’t think it was stylish or fashionable. All of this meant that we had to speak to the girls toward the beginning of the first term. We also needed a school that was close enough to Lusaka that we could travel to support them on a semi-regular basis. Kasisi was the first and only school on our shortlist. 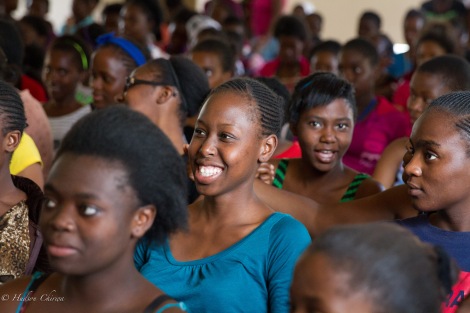 The young ladies were very receptive and hungry for information and knowledge. Can’t wait for Term 2

The plan was that we would buy products for 20 girls. We thought through what is the best regimen for high school that is simple enough to carry to boarding school and also affordable and not complicated. We came up with a co-washing regimen that used Apple Cider Vinegar for clarifying and honey for deep conditioning. We were also going to give them a notebook to keep a hair diary. In the end, the school suggested we speak to the whole school so we increased the number of starter packs to 30 and came up with a natural hair quiz to help identify who would get the starter packs and join the mentorship programme. 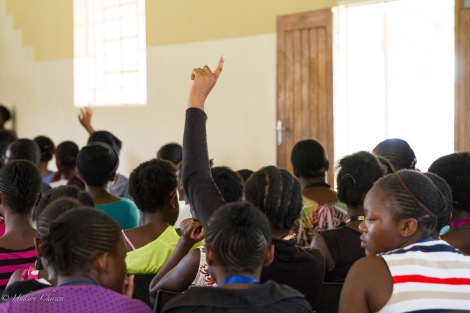 Getting ready to answer the natural hair quiz questions

Once we announced the project, donations started coming in. We basically bought out the city of Lusaka’s entire supply of Tresemme Naturals Conditioner. I drove to every single Pick n Pay supermarket in the city and bought them all, but they were still not enough. Some even had to come from Ndola (a 3 hour drive away). There was a shortage of Apple Cider Vinegar too. Coconut oil was also elusive. But no product more so than shea butter which was out of stock with every single supplier. In the end, we collected donations of shea butter from well wishers and gave each girl a sample in a lip balm size tub. We are still waiting for a consignment of shea butter from Ghana so that we take them the full supply. At this rate term one will be over. Fortunately, they have coconut oil to tide them over. 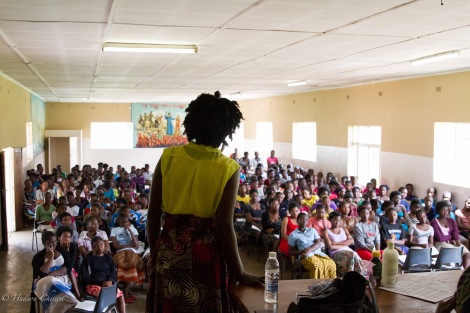 So on the morning of Saturday 25th January we bundled into several vehicles and started off for Kasisi. This was after running around like headless chickens doing last minute photocopies to create the handouts and ensure each folder had all the correct information, including deep conditioning and spritz recipes.

We began the afternoon buy giving a general talk on natural hair care, debunking myths and misconceptions with science and evidence informed facts. Then we had a quiz to test the understanding. The last question on the quiz sheet was, “How do you feel about your natural hair”? This was the clincher that would enable us determine who of the 200 students would get one of the 30 natural hair starter packs. 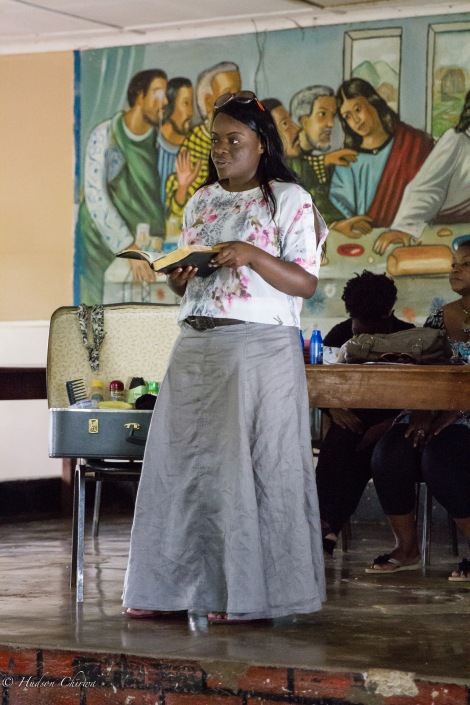 Apart from, hair, careers etc, we also shared the Word

After collecting the quiz answer sheets, our other speakers took the stage. First up was Phoebe who shared the Gospel, reminding the us all of Christ’s question, “What does it profit a man if he gain the world but lose his own soul?” Then Chilungu, a former Kasisi student encouraged the girls to keep focused and do their school proud. After that, Chola spoke to the girls about the importance of setting goals in life. Sampa, a 6th year medical student, shared how when she was in Grade 12, a young doctor came to her school and gave a talk that inspired her to go to medical school and one day become a doctor too. This is what she shared with us when she sent us an email saying she wanted to come and speak because she had a personal experience that it has an impact. Imagine Sampa’s surprise when getting out of one car at Kasisi to find the other speaker was Dr Maria Akani — the very same doctor who had come to her school so many years ago. This was a touching and inspiring moment for all of us and especially for Maria and Sampa. It underscored why investing in young people is so important. None of us should underestimate the impact of what we say to the next generation. #SoWorthIt! 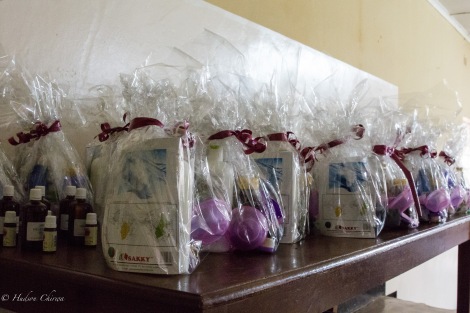 The Natural Hair Starter packs waiting to be distributed

While the speakers were on stage, our other volunteers were marking the quiz answer sheets and placing them in yes or no piles. Those who got all the answers correct were then scrutinised based on their answers to the last question, “How do you feel about your natural hair”? It was difficult to choose and obviously, it was subjective. We tried to strike a balance between those that loved their natural hair, those that hated it and those who just wanted to know more about it. 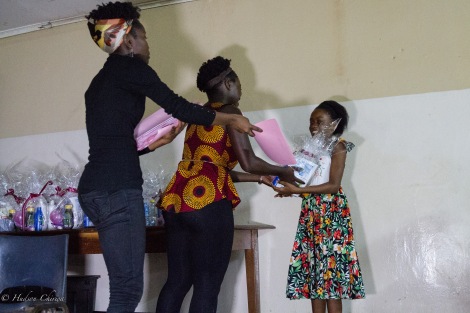 “It’s not growing to my expectations but I still like it. I don’t think I want to cut it” — RBS

“Very bad because it does not grow, has got dandruff, split ends and it is very hard to take care of, does not make me feel pretty at all. Sometimes I feel like cutting it off” — RS 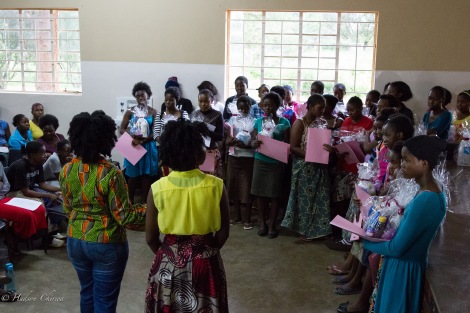 Giving a pep talk to the lucky 30

“Its embarrassing and is difficult to maintain” — S

“My hair is nice and needs protection. My hair is even better than whites hair and I appreciate it because it is thick” — OS

“That is is very bad and I would want it to grow. It is very hard to maintain it so I normally braid it, it’s not nice, I don’t like it” — LC

“My hair in my opinion is very short, shaggy and very dandruffy. My hair is hard to maintain and gets dirty very easily. Simply put I hate my hair” — MS 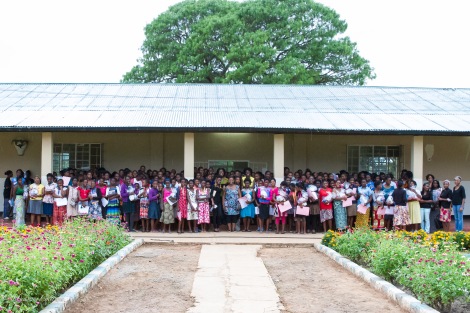 “I’m not too proud about it. Its hard to maintain but if I got that package maybe I can take good care of it” — TC

“I feel that it is so hard and unbearable. I feel like cutting it off it’s so dry” — PP

And lastly, my two personal favourites:

“Sometimes my hair is just too hard to manage. At times its really easy to work with, but hey its part of being an African Queen” — PD

“My hair is an accessory and a God given fashion statement. I love it, simply put” — EM 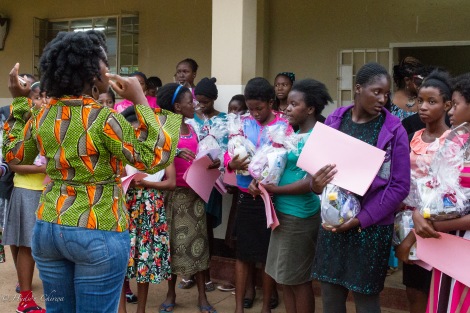 One last word to the girls about next steps

Thank you so much to everyone that supported this first phase of the Kasisi Project. When you are passionate about something and set out to just do it, it is humbling when others buy into your vision and sacrifice to support it too. We did not have to ask anyone for contributions, they just started calling, texting, inboxing and emailing from all over Zambia and the world. We received cash donations as well as in-kind contributions. People gave from what they had. The shortage of shea butter and Tresemme Naturals was lessened due to donations from people’s cupboards. One lady even called from the plane as it was about to take off to ensure we would send someone to collect the Tresemme she had left on her dressing table. Everyone who we approached to speak said, “yes, yes, yes”. Others said they would come along for moral support. I know that others remembered us in prayer. In short, the response was overwhelming. We are also really grateful to the school management and administration at Kasisi Girls Secondary School for allowing us to come and speak with their students. Last but not least, thank you to Hudson Chirwa who came to photograph the event for us. 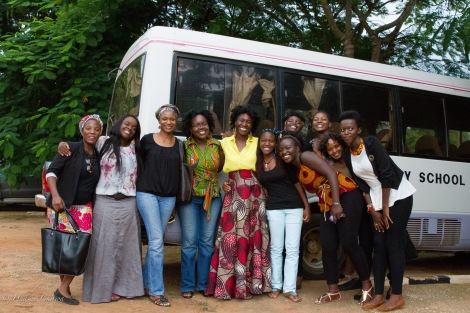 The ZedHair Team that went to support the outreach event

Term One is done and dusted. We are now preparing for Term Two (sometime in May) and after that Term Three (in September). In terms of support, we need contributions to purchase the products for each girl. We also need speakers who are willing to take time out to come and share some words of wisdom with the girls.

What about other schools?

The August natural hair workshop will be for high school students and will be held in Lusaka. This way we are not focusing on one school only, but the opportunity is open to anyone to attend, so long as they are in high school and buy a ticket. We will try to hold the workshops as often as we can during school holidays.