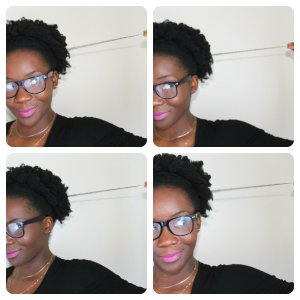 Guess who is back?

I know, I know…it has been almost a year or so since my last ZedHair post.

Life has this thing of throwing all sorts of things, mostly great in my case, that can keep you crazy busy but now, I am committed to appearing more often than not.

Can I just say…I missed you though.

A huge welcome to the new ZedHair readers… 5000 plus likes on Facebook? Totally awesome!!!

So now that we got that out of the way…so Sibongile, how is your natural hair doing? For the most part…it has been great…well…until the end of January 2014 that is.

It was a nice cool Saturday, the kids were chilling and the hubs was reading…all was well. I decided to give my kinks a good detangling session…with a comb.

Yes…I decided against my better judgment to use a seamless, wide tooth comb to detangle my hair. As I have shared before, since clocking 3 years natural in November of 2013, I have finger-detangled exclusively for the latter part of two of those years.

Why? Simply due to the fact that I have mostly *fine, tightly **kinked of medium to high ***density  hair. So it is only natural that my hair breaks easily with the simplest handling that exceeds its ****tensile strength. Its kinkiness also increases the likelihood of the hair strands becoming entangled with each other or what I call, a single and free to mingle hair strand party in Tangle City. Tangles and knots can lead to breakage when handled roughly. So I prefer to use my fingers so that I feel the tangles and knots which a comb doesn’t afford me and will mostly likely snag knots that will break the hair with a simple comb through.

I did the necessary preparation which included a light spritzing of water for  a damp feel and good coat of Extra Virgin Olive Oil on my hair. I proceeded to finger detangle the ends followed by the comb working down to the roots.

After  several-I-can’t-believe-it-took-that-long hours, I did notice an increased number of hair strands on the comb but I quickly dismissed them as shed hair without checking for the bulb attachment. I continued my wash day like normal and flat twisted my hair to rock one of my favourite “out” styles for the Zedian Naturals Weekly Hair Challenge.

The following Tuesday morning, I unraveled my flat twist and curl and it felt…lighter. When I had flat twisted the hair, I made sure to use smaller perm rods in hopes of having tighter curls that were close to the scalp to give the illusion of a Deva Cut.

So while the Deva cut intended look was successful, the volume was missing and was pretty evident to me.  After the curls fell, I realized how much thinner my hair appeared. Taking a small sections at a time, I assessed the hair and realized that I had in fact had some significant breakage.

Honestly? My heart sunk. My hair type is the kind that needs extra handling and extra TLC in order to thrive especially if length retention is a priority. For the past three years, I had taken extra care and caution to make sure my hair well preserved with minimal wear and tear. It felt like one seemly harmless technique caused a significant setback in a matter of hours.

After accepting what had happened, I quickly cooed the hair into another hairstyle for the challenge and went to create a hair regimen to help me recover the fullness I knew my hair could achieve again.

That recovery plan will be shared in Part Deux…till then…

**Kinks are the multiple bends along each hair strand.

***Density is number of hair follicles on the scalp.

****Tensile strength is  maximum stress that a material can withstand while being stretched or pulled before failing or breaking.