Isn’t it great that the First African Anchor Woman in China is a natural sister? 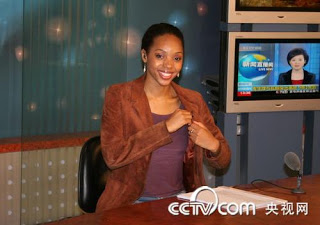 28-year-old Zimbabwean Vimbayi Kajese first came to China for a visit in 2004, then moved to Beijing in 2006. She now works as the early morning news presenter at CCTV-9, the English Channel of China Central Television. She is the first African news presenter on the Chinese Mainland and perhaps the whole of Asia too. Her bright smile, eloquent diction and elegant demeanor have impressed millions of TV viewers and Internet users around the world.

Vimbayi Kajese is representing us all the way in China. She had this to say about her hair.

“To other Black folks and Africans, I get dismissed for having ‘good hair’… so ‘it’s no wonder I can afford to be natural’.  I quickly remind them that I am pure African, I am not mixed and my hair is the kinkiest 4b type hair there is…  maximum shrinkage included! My hair is ‘good’ because I treat it well, but I if I didn’t, it would be a coarse matted mess”.