I am presently broke and jobless (too much honesty?) and just spent $34 on 2 combs. You heard me right, 2 combs!?!?!?!!!! I mean seriously, I’m not even willing to pay over $3 for a good brush much less a comb and I just dropped that much money (that I really shouldn’t have) on combs, and only 2 of them at that.

But before we pass judgement, I should fill you in on what’s been happening with my hair over the last 3 months.

I have had such terrible breakage. Remember when I said I shed a lot, so I’m used to seeing many hairs separated from by head. This winter was just bad. There’s been a serious drought where I live and the dryness of this winter really reinforced that. It was so dry my skin hurt, and for a couple weeks I had to resort to using Vaseline and skin oil right on my skin to help fight the dryness. Anyone who’s read my posts knows that I am NOT a fan on oil/grease on my hair, and also my body. Not for me, no thank you. However this winter has been so bad I’ve tried everything. I’m having to wash my hair twice a week (added a co-wash), but be careful that I don’t have to go outside when I do. As I don’t use heat, I’ve tried the ponytail roller set for my hair and that hasn’t worked as the rubber bands that I use broke off as my hair dried and became full. I should add that I am presently 15 weeks post relaxer (I’m a stretcher).

It’s been so dry that I’ve taken to having a pair of hair scissors on my nightstand so that I can attack pesky split ends whenever I see them and just when I think I have them under control, about a week later I find some more. 2 weeks ago, I was shocked to find a mind-shaft split. I didn’t even know that was possible. Seriously, I had a hair that had a split in the middle but was attached on both ends. Not knowing what the protocol was I cut it off, about a quarter of an inch above where the split started. Then last week I split my rat-tail comb in my hair while untangling to put in rollers. The comb snapped right into 2. This is nothing new for me, I had this happen a lot as a kid, till my mother took to buying metal combs for my head. But its been enough time since this had happened for it to shock me. 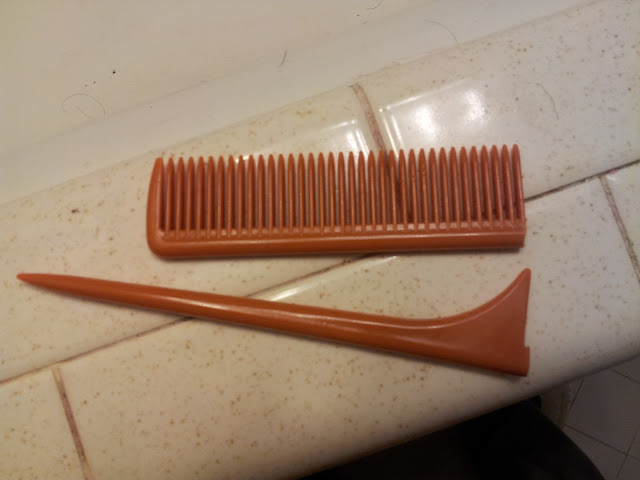 Said snapped comb. Can you believe this?

Baffled by this and the persistent dryness and breakage of my hair (it doesn’t dry fast, so I know my shafts aren’t very porous/too badly damaged by relaxers), and the fact that my usual products just didn’t seem to work anymore, I took to the internet and began some research on breakage and learned for the first time about comb seams and how much damage they can do to the hair shaft.

What is a comb seam?

A seam is where the sides of a comb come together and it is easier to see in bigger combs, or when one snaps their comb in their hair for instance. It is a line that usually runs up the middle of the combs teeth, you can see it on some combs and feel it on others. This pertains to plastic combs only. 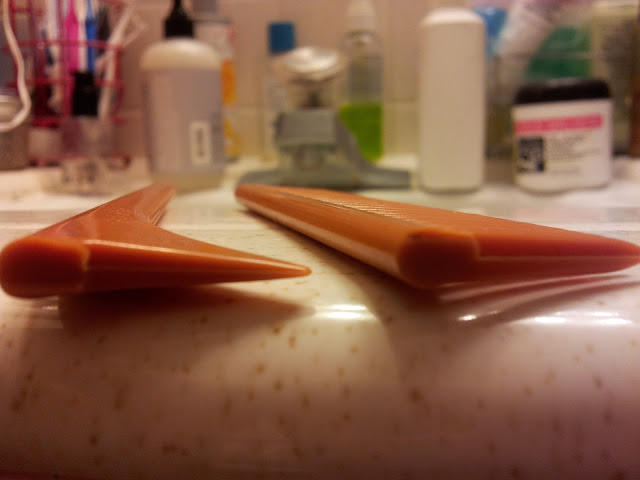 See the thin line that runs down the middle of the comb, that’s the seam.
(Forgive the beauty products that line my sink.)

Some seams are easier to see than others but that doesn’t mean that they damage the hair any less. These seams can be quite sharp, I think most blogs referred to it as razor-sharp and they can and do cut through hair shafts and even if they don’t, the seam agitates and snags along the shaft, so it ultimately still damages the hair. Imagine my shock when I looked at all of my combs and they all had seams, some which were noticeably sharp and protruding. Using these combs while I was detangling my hair was doing more harm than good. You can’t see it very well in the pictures but the seams in the comb that snapped are actually raised and noticeable.

So I went online to look for seamless combs, these are typically made of wood, bone, or horn. There are some options made of plastic (some of which claim to be seamless but aren’t), but they run a pretty penny. After reading through at least a dozen blog posts and about over 10 pages of forums on the Long Hair Care Forum, I decided to buy the Hercules Sagemann Magic Star jumbo rake comb (I have a lot of really thick hair and it made sense) and a new rat-tail comb from the same company. From what I read it appeared that this comb was better with natural hair and the Hairsense seamless detangler (option #2) was better for relaxed hair. As my new growth is problem central and I am trying to reduce the level of manipulation in my hair (combing, styling and the like), it seemed the logical choice.

I should add that I bought a wooden comb off of eBay for about $2 that’s a little wider spaced than the rat-tail comb. You can expect a review of the combs once they arrive in the mail.

In the meantime I’m almost deathly afraid to comb my hair and have just put it in cornrows. I guess I’ll put one of my wigs to work if I have to get dressed up between now and then.

3 responses to “Combs, splits and other little known facts”